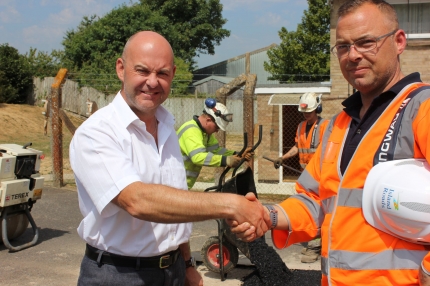 Island Roads volunteers have teamed up with the world’s oldest surviving scout group to undertake improvement work at ‘The Wendes Hall’, the Headquarters of 1st Newport Scout Group (The Old Guard) and a true community facility in Newport.

Under the company’s volunteering scheme, an Island Roads team spent a day undertaking various repairs at the Woodbine Close HQ of the 110-year-old First Newport Scout Group (the Old Guard).

Outside areas at the scout HQ, which is also used by a host of other local groups and organisations, were in need of some general repairs – particularly resurfacing of some of its hard-standing areas and a private access road, which is not part of the highways PFI project network.

“We do our own maintenance whenever we can but we are not geared up to undertake tasks such as resurfacing,” said Group Scout Leader Rod Warne.

“It would have taken a huge amount of cash to get someone in to do the whole lot and that is cash we just do not have. We bought the required resurfacing material but were hugely grateful to the team from Island Roads who were able to lay it.”

Rod said the group was keen to ensure the facility was in tip-top condition during its 110th anniversary year. “This is a thriving community hub. Not only do we have 80 kids a week using it for scouting activities, we also host other activities including the WI, yoga, Tai Chi, Independent Arts, Slimming World, wood turning groups and taekwondo,” he said.

“Ours is a real community amenity so it is not just the 1st Newport Scout Group who will benefit from Island Roads’ help and these improvements.”

Glen Jarman, Island Roads highways supervisor, said: “It was a pleasure to help out. The 1st Newport Scout Group is a really successful and thriving scout group but this facility is also enjoyed by the wider community so we are happy that this day’s volunteering will bring benefits to many people.”