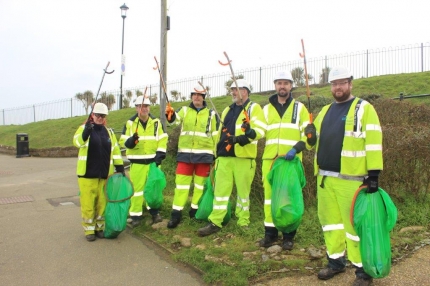 Volunteers from Island Roads have backed a campaign to get half a million people out and about cleaning up their local communities in March 2017.

Organisers of the Great British Spring Clean hope the initiative will be an annual one helping to bring people together and clean up the country.

As part of the initial campaign, six Island Roads staff took part in a beach litter clearance on Small Hope Beach Shanklin on Friday (March 3) afternoon. All in all six bags of rubbish were collected. Included in the rubbish removed were an old lilo. The following day (Saturday) Island Roads also took away 33 bags of rubbish picked up by Green Towns Shanklin volunteers on the stretch between Small Hope Beach and Luccombe.

Island Roads staff joined the litter pick as part of their volunteering programme under which staff are able to take up to two days paid leave in order to support local good causes and initiatives. Island Road’s contractual responsibilities are for litter on the public highway network and not beaches.

Island Roads volunteer, senior district steward, Matt Shaw, said: “It was great to be part of the team and the amount of rubbish collected shows that our efforts have been worthwhile.”

Councillor Julie Jones-Evans, executive member for regeneration said: “One of the basic steps the Island can take to increase its appeal to visitors and to would-be investors is to make the very best of the natural resources we have here already. Keeping our beautiful environment, town and village centres clutter and litter free is key to creating a first good impression as a place in which to live and invest.”

The Great British Spring Clean is supported by numerous groups and organisations including the Women’s Institute, CPRE, RSPB, Green Towns Shanklin, Cleanup UK, Greenspace Scotland and the RSPCA, as well as a range of businesses.