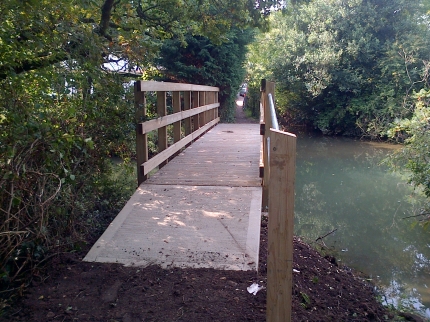 Three footbridges have been improved by Island Roads as part of continuing efforts to improve pedestrian and cycling access under the Highways PFI.

Shalfleet Mill footbridge has been completely replaced along with the decks at Birchmore Cycletrack Bridge at Blackwater and the Redway Cattle Creep near Godshill. All work was completed on schedule and despite Shalfleet Mill’s relatively remote location, which made access to the work team and their equipment difficult, the scheme was completed safely in just seven days. The project has already been praised by residents, one of who said: “We have just arrived on the Island after ten days away. We think the new footbridge is absolutely terrific, and it will soon weather to a warm grey.”

The work is part of the Highways PFI improvement programme that will see bridges and retaining walls improved or replaced in the first seven-years of the contract.

To ensure all relevant parties are consultedand worked effectivelytogether throughout the programme, Island Roads has also hosted an environmental forum. Among organisations represented were Natural England, The Hampshire and IW Wildlife Trust and the Environment Agency as well as representatives from the council’s rights of way, planning, conservation and archaeology functions.

Victoria Keefe, Structures Manager said: “An important part of the PFI is the improvement of structures across the Island. In many cases the work involved is substantial and often this is carried out in areas that are environmentally sensitive.

“The forum highlighted some significant other views from stakeholders around the Island which are now being incorporated into Island Roads consultation processes.”

Councillor Phil Jordan, Executive member with responsibility for highways PFI, said: “I am glad to see Island Roads working closely with the council and other agencies through the newly created environmental forum to ensure that its work takes into account a range of environmental issues from landscape, biodiversity, trees and flood related issues as well as the historic environment and archaeological information. It is important that Island Roads considers these issues as it plans its programme of works on structures across the Island.”