Isle of Wight Foundation to support stronger communities in 2018 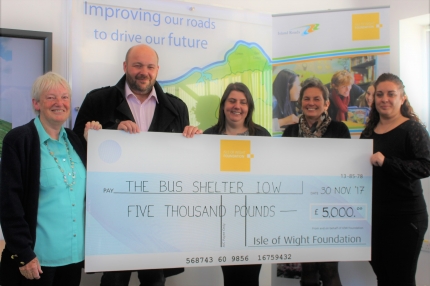 Organisations, groups and projects who are working to tackle social exclusion are once again being encouraged to apply for grant aid from the Isle of Wight Foundation.

For the fifth year running, the Foundation – comprising the partners behind the Highways PFI – are awarding grants of between £3,000 and £16,000 to projects that meet its criteria.

So far, upwards of a quarter of a million pounds has been donated by the foundation to over 25 local good causes. Last year’s recipients included St Catherine’s School, Age UK, the Island Riding Centre, The Bus Shelter, IW Beach Soccer and The Wave Project.

Now the foundation, which is jointly funded by Island Roads, Meridiam and VINCI UK, is asking for applications for 2018. Key to securing grants is demonstrating how groups will reduce social exclusion through two main themes: access to employment and building better communities.

Foundation chairman Phillip Horton, said: “Since 2013 we have been determined to ensure that the Highways PFI is about more than improving the Island’s highways – as important as that is. We want to play an active role in community life and supporting the groups who are working to tackle social exclusion on the Island is a particularly rewarding way of doing that.

“Over the past five years we have been very proud to have assisted a wide range of groups who are doing a great deal of very good work. We are looking forward to working with more of these groups through the 2018 grant process.”

Isle of Wight Council cabinet member responsible for the Highways PFI, Cllr Ian Ward, said: “It is clear just what a positive difference the Highways PFI is making to the Island’s infrastructure. I am delighted that running alongside this improvement is a clear commitment by those behind the project to bring about real social benefits too.”

Applications are invited from 2 February and must be received by noon on 4 May.

For further details of the scheme and eligibility criteria please visit www.islandroads.com