Jordan heads back to old school for volunteer project 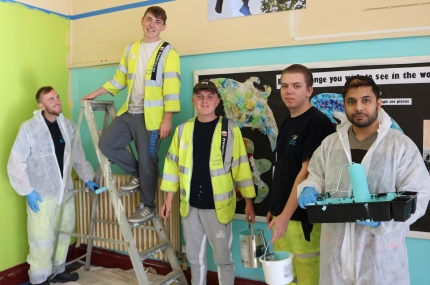 Electrician Jordan Power was delighted to return to his old school as part of an Island Roads volunteering team.

Electrician Jordan Power was delighted to return to his old school as part of an Island Roads volunteering team.

Jordan and four colleagues answered a request from Nine Acres Primary for help in repainting the school’s hall. Using colours chosen by pupils – a vibrant mix of orange, green and blue – the Island Roads team helped transform the hall in a day’s work.

For Jordan it was also a labour of love. Not only does he have fond memories of his time as a Nine Acres pupil, his twin brothers Archie and Riley (5) and his sister Millie (10) are all pupils there while his mother Samantha also previously worked in the pre-school and after school clubs.

“I have really good memories of Nine Acres and it was great to go back after all these years to give something back to the school,“ said Jordan, 22, who joined Island Roads as a 17 year-old in 2013 after completing an electrician’s course at the IW College.

“To be honest, the school had not changed that much – the hall was pretty much how I remembered it though it looks a lot brighter now.”

The Island Roads team carried out the work under the company’s volunteering scheme which encourages staff to take paid leave to support local community projects.

Nine Acres head teacher Beth Dyer, who also joined in the painting work, said: “The hall had not been repainted for some years – certainly not since Jordan was a pupil – and the children love the new look.

“It was great to have the support of Island Roads staff and particularly nice to have Jordan back involved with the school and to see how well he has done for himself. The transformation of the hall is incredible and we are all really grateful to the Island Roads team.”