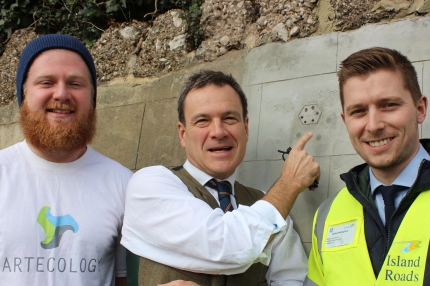 Special ceramic tubes are being incorporated into the retaining wall between Brownlow Road and Ranelagh Road as part of work to repair the structure. These tubes will provide ‘homes’ for the local bee population.

The work is the latest Island Roads project to incorporate environmental features as part of an ongoing partnership with Sandown-based company Artecology.

Ian Boyd of Artecology said: “This is a really useful practical step to add habitat for solitary bees into the built environment. Often it is the simple measures that are the most effective and we are delighted to, once again, be working with Island Roads to incorporate a feature that benefits wildlife. We are really encouraged that Island Roads takes its responsibility to the environment so seriously.”

Previously Island Roads have worked with Artecology and sister-company Arc Consulting to create an award-winning ‘Eelevator’ to assist migrating eels travel up the watercourse beneath Holbrooke’s Bridge at Bouldnor. Island Roads and Artecology teamed up again to install tubes during repairs to walls at La Falaise Car Park, while Island Roads also worked with another consultant – Appuldurcombe-based Eagle Eye – at The Terraces in Ventnor to provide a habitat for the local population of wall lizards.

Special stamps bearing the imprint of a bee have been created by public artists Eccleston George and will enable Island Roads to mark out the installations, highlighting their purpose and drawing attention to the need to conserve pollinators. Stamps will also be used to mark lizard habitats that are being included as part of repairs to the walls around La Falaise car park.

Ian Hodson, Island Roads structures manager, said: “Island Roads is a business that cares about our natural environment which is why we liaise closely with Artecology, Arc and other local companies to explore ways in which our work can bring benefits to biodiversity as well as to the Island’s transport infrastructure.  Traditionally, highway engineers may not have instinctively looked at  including environmental improvements in schemes, but as shown by the success of recent measures like the Eelevator,  we look for ways to improve the habitats for wildlife wherever possible.”

Jason Boulter who is Island Roads’ project manager on the Lake Hill scheme, said: “Bee populations across the UK are in decline so it is only right that we take up opportunities like this to give them a helping hand here on the Island. This shows how engineering work that benefits road users can also take on board the needs of local wildlife.”

The project at Lake has also been praised by Island MP Bob Seely, a former beekeeper who has also been involved in previous discussions to ensure verge maintenance takes into account the need to protect habitat.

“This is a good example of how with a little imagination the needs of local wildlife can be accommodated into engineering work in an effective and educational way,” Bob said.