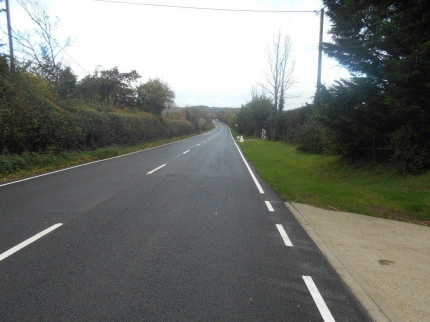 The new road at Rowborough Lane, Brading, which was improved as part of last year's resurfacing programe

Island Roads is about to begin its 2016 road resurfacing programme – easily the most intensive period of road improvement work ever undertaken on the Island.

Up to four surfacing crews will be working around the clock to improve roads of all types across the Island from the end of this month until the end of the year. These four crews will be joined by a team who will apply specialist treatments to some of the Island’s concrete-based roads.

Though the contract is not measured simply in terms of the length of carriageway treated, this year’s work will see around 100km of highways resurfaced. That will bring the total length of road treated so far under the PFI to around 280km – roughly equivalent of a road running almost three times around the Island or, put another way, further than a road running from Southampton to London and back again.

Once again, the work in 2016 will be scheduled to keep disruption to a minimum. This will include undertaking some schemes on the busiest roads at night and outside of the main summer months when traffic volumes are at their greatest.

Details of the programme – which are always subject to change due to factors including the weather, plant issues or unforeseen ground conditions – will be updated and available throughout the year on www.islandroads.com.

Alongside the 2016 resurfacing work will be other activities including drainage schemes at Steyne Road, Bembridge, Wellington Road, Newport, Egypt Esplanade, Cowes, Blackwater Shute, and Ashey Road, Ryde. Island Roads’ traffic light and pedestrian crossing replacement will continue as will the resurfacing of car parks including those at The Grove car park, Ventnor, High Street, Carisbrooke and the main car park in Godshill. The footway resurfacing programme will also continue as will the laying of skid resistant material at agreed sites.

While the road resurfacing programme is, in the main, restricted in the winter months as such work is affected by low temperatures and rainfall, Island Roads has nevertheless recently undertaken several schemes such as the drainage work in Brighstone, the strengthening of Wootton Bridge, and a geotechnical scheme at Newport Road, Ventnor.

“With better weather expected as we enter the spring we are able to resume the major resurfacing work which will build upon the significant improvements we have made to the network since we began resurfacing in 2013,” said Island Roads service director Paul Herbert.

“We have increased our activity year on year and 2016 will be the busiest yet by some distance. Naturally this amount of work will mean some disruption will be inevitable but we endeavour to help ensure that this improvement work is carried out with as little inconvenience to road users as possible.

”Before the PFI began, the roads on the Island were found to be among the very worst in the country. While there is still work to be done, we know we are delivering a significant improvement in the network and we look forward to continuing this during 2016 and beyond.”