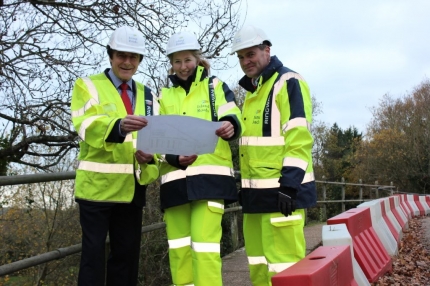 Work is now underway on a major scheme by Island Roads to strengthen a section of Duver Road at St Helens.

As well as strengthening the road in the vicinity of the bridge, the project will also see the footpath rebuilt and a new post and rail timber fence installed to improve the safety and appearance of the road. Following consultation with the local community, the council has also agreed that traffic lights either side of the bridge will be retained as a safety measure, after discussions with local residents and businesses.

The scheme is required as original piling beneath the bridge has deteriorated and earth underneath eroded leaving sections of the structure exposed and less stable. To remedy this, the scheme involves installing 45 concrete piles eleven metres into the ground and the void beneath the road being filled with a concrete-based material.

During the work, a diversion will be in place through the Nodes Point holiday park where the road surface has been upgraded by Island Roads and a temporary road installed to complete the diversion route. The Duver project is expected to be completed by March 2015.

The scheme has been scheduled for the winter period so work takes place outside the main tourism season. Residents, businesses and the local Isle of Wight Council member Councillor Jonathan Bacon have been consulted throughout the project planning period.

The scheme is one of 18 geotechnical projects being undertaken by Island Roads under the highways PFI to preserve the highway at locations that have been prone to historic movement. At the Duver, the extent of the engineering is such that, if stacked end to end, the piles would be nearly three times as high as the Spinnaker Tower in Portsmouth.

Councillor Phil Jordan, Isle of Wight Council member with responsibility for the PFI said: “I am very pleased that the work to provide on-going stability to this important road bridge is being undertaken outside of the main holiday period and that the plans have evolved from meaningful and on-going consultation with the local community.  The scheme is a further example of the continued work being taken to upgrade our highways network and I remain confident that we are starting to see the benefits of these on-going improvements.

“The disruption to local residents and businesses is being kept to a minimum and I am extremely pleased we have managed to implement a scheme of circulation with the help of the adjoining holiday park at Nodes Point.  We will be monitoring progress but look forward to a successful completion date in good time for the holiday season next year.”