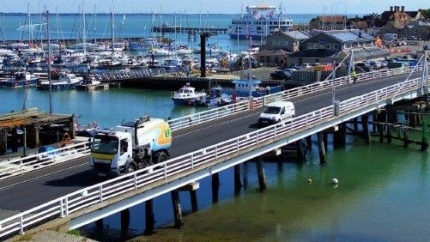 A major Island Roads project to repaint the entire length of Yarmouth Bridge is to begin in June.

It will be the first time the 90-metre long structure will have been taken back to the metal and completely repainted since it was built nearly 35 years ago.

The work will involve applying primer, undercoat and top coat to an estimated 2100 square metres of steelwork that forms the bridge structure. Around 2500 litres of paint will be used.

The project is the largest single scheme being undertaken as part of Island Roads’ structures improvement programme this year in which dozens of bridges and retaining walls are being improved and upgraded. It is anticipated the work will take approximately 23 weeks to complete.

The structure will remain open to road traffic throughout, apart from a short period towards the end of the project when the end sections of the 32-metre swing bridge element will be painted. There will also be a six-week period, after the summer season, when river traffic will not be able to pass under the bridge as the swing bridge section will need to be in a fixed position while it is painted.

Jason Boulter, Island Roads structures project manager said: “This is a big undertaking and a key part of the planning has been how we can carry out the work and keep disruption to road and river users to an absolute minimum.”

“Carrying out work to the swing bridge section also presents additional challenges as we have to suspend the required scaffolding from the bridge itself, as we cannot use the riverbed for support.

“We will also be using some of the latest paint products available, to protect the bridge against the elements for many years to come.”

Various consents and approvals are also required to allow the scheme to progress. Full details of restrictions to road and river users will be publicised in due course. Preparation work is due to begin on site in mid-June.