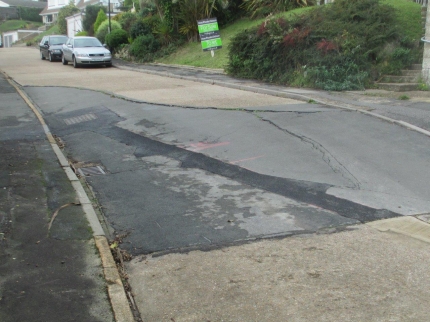 The effect of ground movement at Steephill Court Road

Island Roads will be taking its mobile visitor centre to Ventnor at the end of the month to explain to residents more about a forthcoming major scheme to improve sections of Steephill Court Road and Castle Court.

The scheme, which will involve improvements to the footway and kerbing and also the rebuilding and resurfacing sections of the road is expected to last five weeks. It is currently scheduled to begin on November 8 and ahead of that Island Roads will be taking its mobile visitor centre to Castle Court on Monday October 30 between noon and 1.30pm to talk to residents about the scheme and how they will be affected.

In order to reduce disruption, the project will be split into phases. During work, vehicle movements will be restricted although pedestrian access will be maintained. All work will be carried out during the day – the hours of work will vary according to the phase being undertaken but residents have also received letters giving details of the schedule.

Island Roads has also contacted Ventnor Town Council about the works as they will affect the number 31 bus that uses Steephill Court Road. Alternative arrangements have been communicated to residents.

Stephen Ashman, Island Roads deputy service director said: “We recognise that these improvement works may cause some inconvenience for local residents but we hope any disruption will be offset by the long-term improvements we are making. We would like to thank residents in advance for their assistance and we look forward to answering any questions they may have when we visit on 30 October.”

The reason the scheme is so intensive is that large concrete slabs that make up the current road surface will be removed in Steephill Court Road and new foundations will be created before surfacing is laid. Upgraded ground monitoring equipment will also be installed to detect geological movements that have historically occurred in this area.