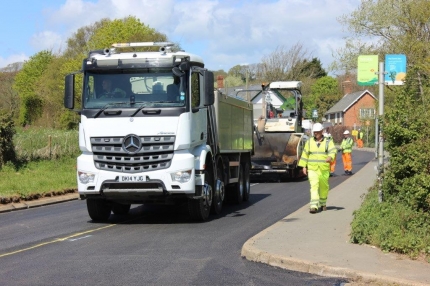 Over 74 kilometres of highway and more than 650 sections of footway have been improved by Island Roads this year.

This is more activity than originally planned by Island Roads and has seen around 1 million square metres of resurfacing material used to improve the network since March.

And as the company moves into its winter programme, it has also confirmed two major drainage schemes – in Brighstone, and Beacon Alley, Godshill, will be completed during the colder weather as well as a number of minor schemes and drainage investigations.

In addition there will be a road strengthening project at The Graben, Ventnor and, of course the completion of the scheme to strengthen Wootton Bridge that will eventually see the current temporary restrictions lifted. Road users should also expect to encounter carriageway investigation works such as trial holes and coring which is being done ahead of next year’s surfacing programme. Island Roads will also continue its footway upgrade programme through the winter period as the quantity and type of materials used are less susceptible to the elements

Island Roads will in the coming weeks also be identifying its resurfacing programme for next year.While the programme will largely be determined by the contractual requirement to improve all type of roads – from the busiest to lightly-used rural routes – evenly across the Island, stakeholders such as parish and town councils will also be asked to nominate the roads they think are most in need of earliest treatment and, if possible, those suggested will be incorporated into the 2016 programme if appropriate to do so.

The winter maintenance fleet has also been primed and is ready to go as are the maintenance teams who will be responsible for responding to reports of potholes. Though pothole maintenance is a year-round operation, the freeze-thaw action of the winter elements means they are more likely to form in the colder months. During past periods of freezing weather, up to eight designated defect maintenance teams have between them provided an Island-wide 24-7 response to pothole reports.

Island Roads is however stressing that because of the historically poor condition of the network, and because there are still four years left of a seven-year resurfacing programme, it is inevitable some potholes will form in the coming months. However, Island Roads will ensure these highway defects are dealt with in accordance with the PFI contract and national guidelines.

“We need to remember that the Island was granted the PFI because its roads were among the very worst in the country. While we have brought about considerable improvement to the network, it is impossible to eradicate the issues overnight,” said Paul Herbert, Island Roads Service Director.

“We have seen a very intense period of resurfacing over the summer and despite the wetter than expected recent weather, we have completed our program of work and exceeded our target at the beginning of the year which was to resurface 60 kilometres. Next year will be another busy period– we are making good progress in our requirement to bring the condition of the network up to the required standard.”