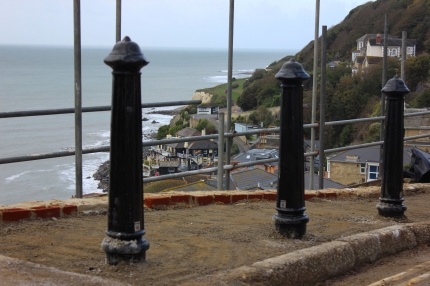 The bollards being installed in Belgrave Road

Work by Island Roads in Belgrave Road, Ventnor, is seeking to make the road safer whilst preserving the town’s special character.

Island Roads is currently replacing the section of parapet damaged in a road traffic incident late last year. The challenge has been to come up with a design that complements the surrounding street-scene – that lies in a Conservation Area – but that is strong enough to prevent a similar incident happening again.

“The usual highway engineering solution would have been to erect a steel safety barrier at this location,” said Island Roads structures manager Ian Hodson.

“The trouble with that solution was that it would obviously not have been in keeping with the coastal and Victorian character of much of Ventnor and was unsuitable for the narrow one-way road without losing the only footway, so we have had to be creative.”

The solution, agreed after consultation with the IW Council’s Conservation Officer, has been to install traditional-looking cast iron bollards reinforced by steel inserts that are far more in keeping with Ventnor’s charm but at the same time will prevent vehicles leaving the road and going over the top of the retaining wall.  The original cast iron parapet was too badly damaged to be repaired, but a new one of similar appearance will be installed as a pedestrian restraint.

The work, to be undertaken over four weeks, was delayed until after the summer holiday season, and has required traffic management.

Ian said: “We would like to thank residents for their co-operation and understanding during this work which is due, weather permitting, to finish on October 18.”