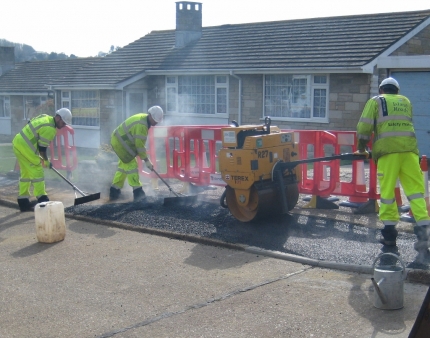 Another busy period as more pavement improvements are being carried out across the Island.

During the year at least four crews will be working to ensure that Island Roads continues to deliver the targets for pavement improvements required under the Highways PFI contract.

These targets involve bringing the average condition of the network of 756 kilometres of pavements up to the required standard in each of the six project districts and as part of that, this year’s work will see around 50 kilometres of pavements improved – roughly the equivalent of a pavement running right across the Island from the Needles to the Nab Tower.

In the vast majority of schemes, the work will be done during the day and without the need for a road closure or traffic restrictions. Residents will be informed by letter in advance of works commencing in their road.  Increasingly, Island Roads is also looking to carry out pavement work to coincide with road improvement schemes and the work will complement the huge programme of road improvement schemes recently announced by Island Roads.

Paul Johnson, Island Roads footways project manager said: “We have already made great progress in upgrading the Island’s pavement network alongside our highways programme and this work will continue apace throughout the spring and summer.

“While we undertake pavement resurfacing throughout the year, the warmer, drier months offer the best working conditions and we look forward to another busy period in which we will make further significant progress in improving the standard of the Island’s pavements.”

Though the programme is subject to change, some of the sections due for upgrade before the end of September this year include Green Lane and Sandown Road in Shanklin, Cemetery Road in Lake, Yarborough Road, Falcon Road and Sylvan Avenue in East Cowes, The Esplanade at Cowes, Atkinson Drive and Fairlee Road in Newport, Zig Zag Road and Spring Hill in Ventnor, Nodes Road in Northwood, Main Road in Shalfleet, Lushington Hill in Wootton, Queens Road in Sandown, Halletts Shute in  Yarmouth, Binstead Road and Alfred Street in Ryde and Meadow Drive and Steyne Road, Bembridge. A full list of pavement sections currently programmed to be resurfaced is available on the current works section of our website http://www.islandroads.com/66-current-works.html  or by viewing the document attached to this news page.