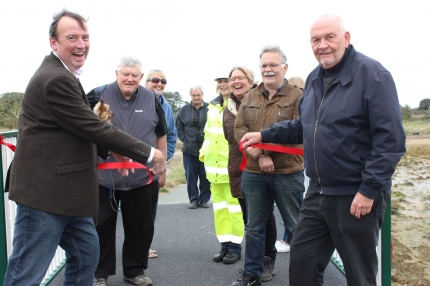 Work by Island Roads to replace two well-used footbridges at St Helens Duver has been given the local seal of approval.

Work by Island Roads to replace two well-used footbridges at St Helens Duver has been given the local seal of approval.

Residents including Isle of Wight Council ward member for Brading, St Helens and Bembridge Cllr Michael Murwill and St Helens Parish Council vice-chairman John Coleman led a walk across the two footbridges that have been replaced by Island Roads as part of its work to maintain and improve the Island’s network of bridges.

To carry out the project, Island Roads used a unique solution to ensure the popular and beautiful route was accessible for locals and visitors for as long as possible during work.

It involved, for the first time on the Island, using a track-based technique to roll in the new replacement decks. Not only did this system ensure the decks were put in place quickly, it meant there was minimum disruption to the local surroundings which are environmentally sensitive.

Cllr Murwill, who with Cllr Coleman officially opened the footbridges, said: “I am delighted that this very popular route has been enhanced by Island Roads in a scheme that really considered both the local community and environmental needs.”

Mr Coleman said: “The replacement of the old footbridges with more durable models which require less maintenance work will help ensure this route will be accessible for years to come.”

The Causeway was constructed to help power the tidal mill at St Helens which was built in around 1780 to grind corn.  The much-used route is linked by both the Old Swing Bridge and the nearby fixed bridge both of which had deteriorated over time.

The project was devised and delivered on programme by Island Roads working with Shanklin-based MMC Diving and London-based bridge specialist LifeSpan Structures, as well as the Isle of Wight Council’s rights of way team.

The Duver Footbridge scheme is part of the Island’s Highway Improvement Programme which is financed in the main through a grant of £477 million awarded by the Department for Transport.