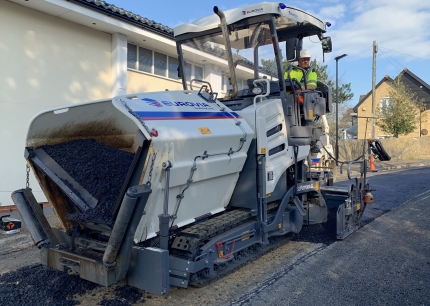 The new ‘midi-paver’ is a specialist in resurfacing narrow roads and will be used extensively in the coming year when numerous rural roads will be improved as part of the 2019 programme of works.

The vehicle is also suitable for resurfacing roads that have difficult ‘barrel’ cambers such as Appley Rise in Ryde which was recently resurfaced using the new vehicle. The midi paver is also equipped to tackle steep sections of the network

Keith Gourlay, Island Roads construction manager, said: “This year will see much attention paid to rural and residential sections of highway which are typically narrower.

“The midi paver has been brought in primarily to tackle these roads that are too narrow for conventional resurfacing vehicles but it also comes into its own working on areas with steep inclines and also on combined footpaths and cycleways.”

The vehicle boasts a series of safety, security and efficiency features making it what is thought to be the most advanced vehicle of its type operating in the UK. Hi-tech features include technology enabling its performance to be monitored remotely and in real time and also allowing its whereabouts to be tracked.

Keith added: “This is a significant investment in the fleet of vehicles delivering the Highway Improvement Programme and already, feedback from staff using it has been very positive.”