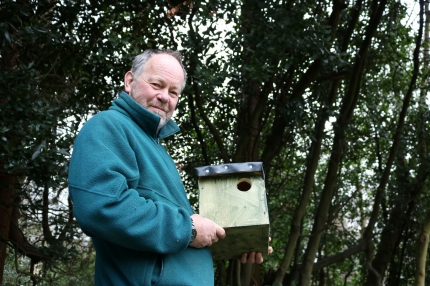 Island Roads and local wildlife experts are playing an unusual estate agent’s role as part of efforts to re-open a currently closed footpath in Shanklin.

The path at Chine Hollow between Popham Road and the Old Village has been closed since last year because a large tree is leaning dangerously over the footway due to ground movement.

Though the large wild cherry needs to be taken down, a red squirrel has set up home in branches, possibly as it prepares to give birth, meaning the tree cannot be touched while the animal is in residence.

This week, following advice from Natural England – Island Roads has installed a swanky new purpose-built squirrel home in a neighbouring tree. The hope is the squirrel will leave its drey on the leaning tree in favour of the waterproof and cosy new home.

The new home, provided by the Wight Squirrel Project was installed this week by local wildlife expert Paul Creer on behalf of local ecological consultants Arc who are advising Island Roads over the issue.

As well as installing the potential new home, Island Roads will monitor the squirrel’s movements via specially installed CCTV to ensure the animal has left its precarious lodgings – at which point the tree can be removed and Chine Hollow re-opened.

Kevin Burton Island Roads network manager said: “While we appreciate the closure of this footpath is an inconvenience, we are sure residents, like us, are keen that we take all necessary steps to look after our wildlife.

“We hope the squirrel will be tempted to use the new house soon and in the meantime we will remain in close contact with our experts and Natural England to ensure we continue to do all that is expected of us.”

Paul Creer, who was assisted in installing the box by Graham Street of the IW Bat Hospital, said: “It is a pleasure to work with a company that takes its duty to the environment seriously. We are all keeping our fingers crossed that the squirrel in question is willing to embrace a change of address so the footpath can be re-opened.

The new home has already been filled with straw and nuts and so hopefully it will prove irresistible.”