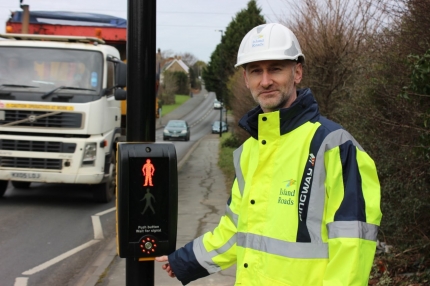 An Island-wide programme to replace 80 traffic signals, including those at pedestrian crossings, is underway.

The work by Island Roads under the Highways PFI programme is the biggest overhaul of traffic signals and pedestrian crossings ever undertaken on the Island.

The programme will use the latest technology to ensure that new traffic signals are LED models making them more energy efficient and brighter than the ones they replace. Many of the crossings also feature technology that ensures adequate time is given for pedestrians to travel across the road and also calculate the safest time for the crossing to be undertaken. At sites with road speeds of 40mph or more, new systems called MOVA  (Microprocessor Optimised Vehicle Actuation) are being used to identify the safest time for people to cross the road, reducing the risk of drivers having to brake suddenly.

An example of this new technology can be seen at Horsebridge Hill, Parkhurst, where the new Pedestrian User Friendly Intelligent Crossing – colloquially known as a Puffin Crossing – has already been installed this month.

Here, the crossing has been designed so the red and green man crossing signals have been positioned so that oncoming traffic is also in the eyeline of a pedestrian looking at the sign to cross. Technology can also take into account the speed of approaching vehicles when determining the best time for pedestrians to cross.

Sensors also detect if a pedestrian, perhaps one with mobility issues, is crossing particularly slowly in which case the crossing time will be increased.

In another innovation, sensors for the new lights in Shalfleet, currently being upgraded, will be activated by actual traffic movement rather than the previous arrangement where the sequence of lights was determined by sensors in the ground picking up the movement of approaching traffic at those single points.

This new arrangement is in response to comments from cyclists that the old system did not always allow them enough time.

The programme of replacing the traffic signals and pedestrian crossings will be completed over the coming five years.

Iain Thornton, Island Roads streetworks manager, said: “Pedestrian crossings are an important part of the network and this programme will see each location improved with the specific needs of users at each location determining how we approach each design.

“All the replacement lights used in the signals and the crossing points will be LED which is designed to be more reliable and energy-efficient while also increasing the visibility of the signals whether at night or during the day making them safer.”