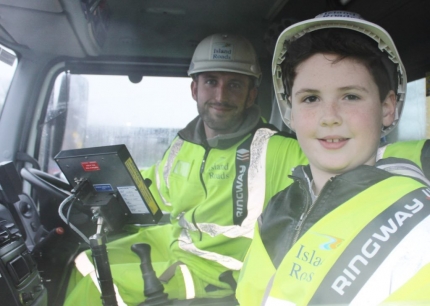 While many youngsters are currently thinking about a trip to Santa at the North Pole, budding young highways engineer Harry Worters had a far more practical visit in mind.

Inspired by his collection of roadwork paraphernalia, Harry, eight, of Lake, is instead dreaming of a ‘site’ Christmas and wanted to visit Island’ Roads work depot in Newport.

Dad David asked Island Roads if such a trip was possible and the Highways PFI company was happy to oblige.

They collected Broadlea Primary pupil in an Island Roads road sweeper and took him to the Stag Lane depot where the street cleansing and winter maintenance fleet is based. Harry got to ride in the cabin of a gritter which took him to the main depot at St Christopher House at nearby Dodnor where he was given a tour by lead operative Jez Mew.

David said: “Harry has a big interest in Island roads and roadworks in general and wants to work for Island Roads when he grows up.

“He likes to create areas in the house and garden for ‘construction’ work and also spends time making things out of pipes, cladding and usually parts of the furniture.

“Island Roads has already been kind enough to give Harry some surplus cones and some signs and he was thrilled to be given the VIP treatment.

“We can’t thank Island Roads enough – they have been so helpful and made a young lad very happy indeed. He is all the more determined to work for them now.”

Harry added: “It was amazing – I loved being the first child in a roadsweeper and testing out all the buttons. I really enjoyed seeing the many, many things that Island Roads does.”

“We hope he found his visit informative and enjoyable – we certainly enjoyed having him here. Island Roads offers numerous careers opportunities and it would be fantastic if one day in the future Harry comes to join us in our work to upgrade and maintain the Island’s highway network.”