On the career path thanks to Island Roads and Army 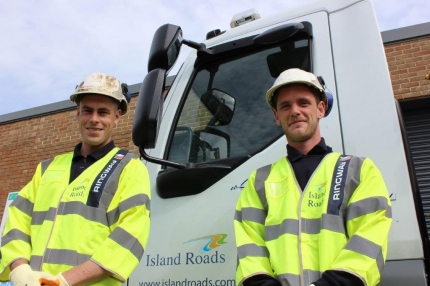 After lengthy spells out of work, two young Island men are firmly on the path to a career in highway improvement thanks to the Army and Island Roads.

Sean Matthews, 25, and Scott Coombes, 24, have both earned full time jobs with Island Roads through a scheme called the Youth Engagement Project – YEP – run by the Job Centre, the Army and supported locally by the Isle of Wight Council.

Under the programme, people who are long-term unemployed are given a two-week Army experience and then placed wth local companies to gain work experience.

In the case of Sean and Scott, following an Army Military Insight Course at Jersey Camp, both were given placements by Island Roads and took to the job so well, that they have now been offered full times roles as highway and footway maintenance operatives.

Both have now left their accommodation at The Foyer and moved into their own flats and are making the most of their new found working lives – and spending power. Sean is planning to take driving lessons while Scott has brought himself a motorcycle to help him get to and from work.

Sean, who had previously undertaken various volunteering roles, said: “Having the job with Island Roads has made a lot of difference. I am learning skills all the time and have a lot more money to spend as well.

“It has taken a bit of getting used to, to be honest, but now I am really enjoying it and hope to stay here for as long as I can. It’s really going well and it is good to be out and about doing something constructive – especially when the sun is shining.”

Scott added: “I have been doing various training through the Job Centre over a number of years but it is really good to be in full-time employment. I really want to thank the Army and Island Roads for giving me this opportunity.”

Mark Downes, Island Roads site agent said the company was pleased to assist the YEP scheme and delighted to have offered jobs to Scott and Sean.

“A major aim of the highways PFI and Island Roads is to help the local economy and to provide work for local people. We employ around 200 Islanders and offer specific programmes to attract new apprenticeships and graduates. We were really pleased to have supported the YEP programme and, in light of the success we have had with Sean and Scott, would certainly look at doing so again,” he said.

“They are doing really well and there are real opportunities for them to develop their career with us.”

Major Mario Pirozzolo, who was responsible for the IW YEP on behalf of 11 Infantry Brigade, said: “Part of our role is investing in Community Engagement, within that; the British Army is keen to deploy resources that encourage self-discipline, team spirit and leadership in young people.

“Having attended the YEP course, it was a natural progression for these youngsters to demonstrate determination through working very hard and subsequently, earning a permanent offer of employment.

“We wish Sean and Scott every success with their new career.  We would also like to thank Island Roads for the support and confidence they are demonstrating in local youth.”