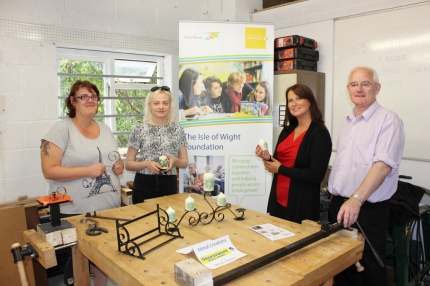 The launch of a new facility providing new skills training for local unemployed people wanting to secure employment was marked by an open day today (Thursday 2nd July 2015). The event at Storeroom2010 was attended by Storeroom2010 staff and tutors, students, visitors and representatives of the Isle of Wight Foundation whose grant of £13,000 awarded earlier this year, helped create the new facility at Somerton Industrial Estate.

Guests took the opportunity to tour the new facilities, observe some activities taking place, including carpentry and metal creations and chat over refreshments to the staff about the training available.

The new unit, a stone’s throw from the existing Storeroom2010 premises on Somerton Industrial Estate, has been developed thanks in part to funding from the Isle of Wight Foundation – a charitable foundation established by the partners in Island Roads.  The Foundation seeks to support projects that aim to tackle social exclusion including projects like Storeroom2010’s which provide people with better access to training and development to improve their life skills and opportunity for employment.

The grant, provided by the IW Foundation, enabled the charity to expand its facilities and continue its skills gap training.  The new unit comprises a carpentry training room, activities area with kitchen facilities, an office and rest area.  It also has outside space which the organisation hopes to use for additional training purposes in the future.

Storeroom2010 Manager Nick Miller said: “The IW Foundation funding has been hugely important to us, enabling us to continue running free skills gap training to help those who are unemployed to learn a new trade and develop new skills to give them a better chance of finding employment.  Our new facilities mean that we have a dedicated area to run these courses and can do so, seven days a week during the daytime and evenings.

“We offer a variety of training courses in small groups, the majority of which are free of charge to those eligible, and we welcome anyone who is interested in finding out more to contact Storeroom Education on 01983 209734.”

Phil Jackson, Chair of the IW Foundation said: “We’re delighted at the progress Storeroom2010 has made with this project, thanks to our funding this year, and hope that these new facilities will benefit a great number of people on the Island.”