Overnight works to improve Medina Way to begin next week 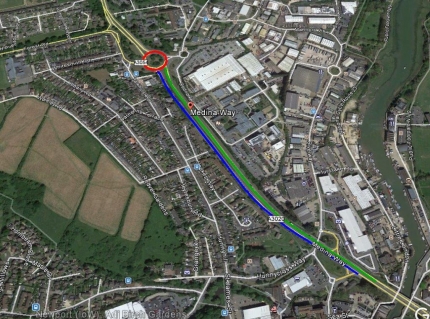 Island Roads will commence work next week to improve a major section of Medina Way dual carriageway at Newport.

The project which will begin on September 4 and is scheduled to end on September 25, will resurface the road in both directions north of Medina Way bridge and also St Mary’s Roundabout. It will mean that following resurfacing and improvements to the bridge last year, the whole of Medina Way between Coppins Bridge and St Mary’s Roundabout will have been upgraded under the Highways PFI. The newly resurfaced section will not be affected by the future junction redesign plans that are currently being progressed by the Isle of Wight Council.

The work on Medina Way and the roundabout will be undertaken in three phases and at night, in order to minimise inconvenience.  There will be no work at weekends.

The three phases are:

Traffic diversion routes will vary as the works proceed, as follows:

Nights of 4th/5th September northbound carriageway up to St Mary’s will be closed. Traffic will be diverted via Trafalgar Road/Carisbrooke and Gunville, southbound traffic is unaffected.

Period between the nights of 5th/6th through to the night of 11th September, only the Northbound carriageway will be closed but traffic can travel northwards towards Cowes via Hunnyhill. Southbound traffic is unaffected.

Nights between 18th and 26th September the southbound carriageway will be closed, the diversion route is to leave at the St Mary’s roundabout and use Hunnyhill. Northbound traffic is unaffected.

Island Roads has met with the emergency services staff from St Mary’s hospital to ensure access to and from the hospital is maintained during the work.

Keith Gourlay, Island Roads construction manager said: “This work will greatly improve what is one of the busiest roads on the Island.

“In order to bring about this improvement it is inevitable that there will be some disruption but we hope that by undertaking the work in three phases overnight and after the main holiday season, any short-term inconvenience will be minimised.  We would like to thank road users in advance for their co-operation.”