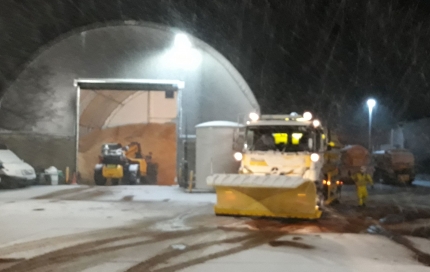 Around 500 tonnes of salt have been used to keep the Island roads as safe as possible during freezing conditions during this year’s winter maintenance season.

Though there was a significant ‘snow event’ beginning in January that required round-the-clock gritting runs, the overall level of snow and ice was less than in previous years when we have averaged around 700 tonnes and 30 runs each year. Not surprisingly, the 2018/19 season was also significantly easier than last year when the ‘Beast from the East’ contributed to the need for 53 runs depositing around 1,456 tonnes.

Though much of the focus is on snow and freezing temperatures, Island Roads staff were also in action keeping roads safe and clear through the ‘named’ storms that hit the Island this winter including Freya, Erik and Gareth.

The winter period was also preceded with an intense gulley cleansing programme to reduce the risk of highway flooding.

Dave Wallis, Island Roads operation and maintenance manager, said: “Though it has been a quieter year in terms of freezing temperatures and snow there has nevertheless been some severe weather that has proved extremely challenging.

“Storm Gareth earlier this month for example brought with it some very wet and windy weather which had our responder teams particularly busy with fallen trees and other related issues.”

Ian Ward, Isle of Wight Council cabinet member responsible for the Highways Improvement Programme added: “Island Roads staff and partners are among a great many people who are in action whatever the weather to help keep the Island safe and its transport links open.

“I would like to thank them again for their efforts this winter.”