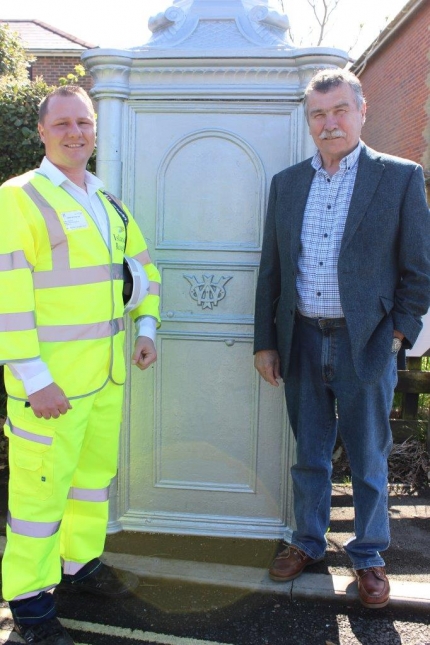 An ornate electrical junction box that reveals much about the Island in bygone days has been renovated by Island Roads.

Working closely with the Isle of Wight Council’s conservation department, the Grade ll listed junction box at the top of Oakhill Road, Pondwell, has been carefully repainted as part of the Highways PFI contract.

It is believed the kiosk was erected around 1900 for the Isle of Wight Light and Power Company to a design attributed to the Callender Iron Co, Falkirk and it is thought to have been used to boost the flagging voltage at the end of a long supply feed.

The square kiosk is cast iron with each face just over a metre and it stands at just over two metres high. The sides, including the door, are decorated with three panels, the top one arched. It is described by Historic England as ‘a rare surviving reminder of the early years of the domestic electricity industry, both nationally and on the Isle of Wight.’

Cllr Reg Barry, the IW Council member for Nettlestone and Seaview, said: “It is important that the Island’s history is preserved so I very much welcome this restoration by island Roads.

“There used to be two of these kiosks in the ward but the other one – at the junction of Apply Road and Puckpool Hill – was knocked down some time ago so I am delighted that Island Roads is taking care of the last remaining one in the area.

John Barry,  Island Roads district steward for the area including the junction box, said the work involved careful preparation of the kiosk and then re-painting using a silver colour agreed with the IW Council’s conservation team.

“Though Island Roads’ job is to improve the roads and footways, we also have a duty to maintain the existing network and its features and we were delighted to once again work with the IW Council to restore this unique reminder of the Island’s history.”