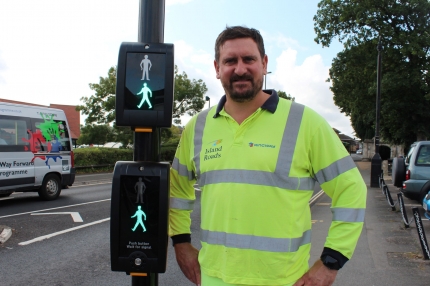 Scott Burborough with one of the new crossings at Church Litten, Newport

Work by Island Roads to upgrade pedestrian crossings across the Island is in full swing.

Under the Highways Improvement Partnership, Island Roads will be upgrading 14 crossing sites before the winter. That is on top of ten sites that have been improved already this year and 40 others since 2013.

The work mainly involves upgrading the sites to become ‘puffin’ crossings – a name taken from ‘pedestrian user friendly intelligence’. This type of crossing is seen as an improvement to ‘pelican’ crossings as they include infra-red cameras that detect the presence of pedestrians.

This makes the crossing ‘intelligent’ as it can increase or reduce the time for which the traffic light remains red. This helps pedestrians as they are not required to walk faster and the crossing remains red until pedestrians are safely across. As such, unlike the pelican crossing, there is no transitional “flashing” phase.

In addition, the lights do not turn red if they have been pushed by someone who is not standing waiting to cross. This means motorists are not subjected to unnecessary delays.

The puffin crossings are also configured so the green man crossing illumination is positioned not on the opposite side of the road as in traditional crossings but instead at the near road side.

This means a pedestrian should be better able to see cars that have failed to stop at the green signal as oncoming traffic remains in the eyeline of people looking for the sign to change.

Another benefit of puffin crossings is that having the lights closer to the user assists visually impaired people who could have difficulty viewing the signal from across the carriageway.

Island Roads powered apparatus manager Scott Burborough said: “For these various reasons, puffin crossings are seen as more advanced than the pelican crossings they are replacing so this programme should make a valuable improvement to the safety of the network.

“As these crossings are traditionally in busy areas then the replacement programme can lead to some disruption.

“We would like to thank motorists for their ongoing co-operation and understanding and hope that they appreciate the work will make an important contribution to keeping our roads as safe as possible.”