Queensgate pupils get lesson in safety 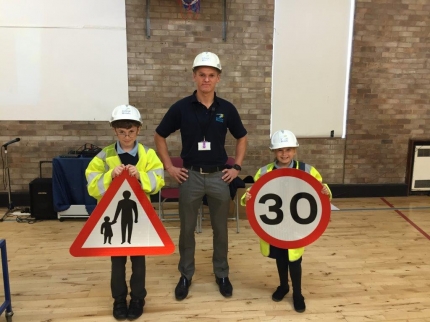 Students from Queensgate Foundation Primary School at East Cowes, have been given a lesson in construction site safety by Island Roads.

Callum Gillett, part of Island Roads’ graduate scheme and communications officer Helen Williams, attended a school assembly ceremony to coincide with the recent highway improvement work has been carried out around the school under the Highways PFI.

Around 400 children were shown a presentation on the dangers of construction sites and general safety issues and were given the chance to try on personal protection equipment.

Callum, a third year undergraduate at the University of Surrey, said: “The assembly was a great way to deliver an important message about construction safety. The children were very enthusiastic and really engaged in the presentation, hopefully they learnt something that will help them to be more aware of the dangers next time they are around a construction site.”

Queensgate headteacher Sam Sillito, thanked Island Roads and added: “I think the assembly has been excellent.

“It has really raised the awareness of the children about staying safe especially when there are lots of road works in the area.  I heard the children talking about the messages from the assembly with their parents as they walked home.”