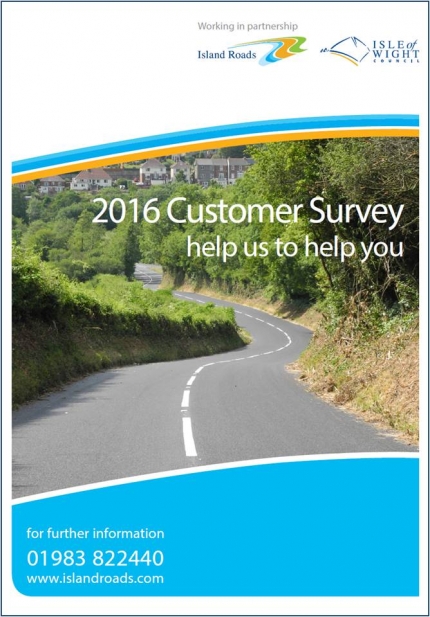 Island Roads are giving residents another opportunity to give their feedback on the highways improvement programme, as the company nears the end of its third year of operations and ahead of this year’s surfacing programme, starting in the Spring, which will be the most extensive to date.

The company is conducting its annual residents’ survey which will enable residents to rate and comment on the range of services provided by the company such as road surfacing and maintenance, pavement improvements, street lighting, traffic management, street cleansing, hedge/verge cutting, winter service, maintenance of street furniture, customer service and communications.

Since the start of the contract in April 2013, Island Roads has surfaced over one million square metres of carriageway – the equivalent of a road stretching from the Island to London and on again as far as Luton.  Around 252 pavements have also been upgraded, over 11,763 new LED lights installed, five major, 29 minor and 22 additional drainage schemes installed, over 30,000 highways defects fixed (including potholes), over 20,000 drains and gullies deep cleansed (95% of the network across the Island), 2,100 fly tips cleared from the network and over 8 million square metres of amenity grass and rural verge areas cut each year.  Island Roads has also collected over 9000 tonnes of sweepings and 3000 tonnes of litter, handled 68,028 enquiries and carried out a range of other improvement and maintenance work out on the Island’s highway network.

Paul Herbert, Service Director at Island Roads said: “It is very important to us that we deliver a professional service across the full scope of our work that is both high quality and valued by local residents.

“We have taken note of residents’ feedback from our last survey and implemented a range of amendments to our service including improvements to the web content, the way traffic management is deployed and the information we are providing about our services.

“We hope that residents will take the time to complete this survey as this will give us an opportunity to assess progress made since the last survey and where improvements can be implemented.”

The survey opens on 1st February and will close on 29th February 2016.