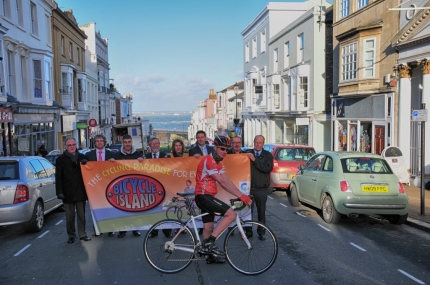 Work to ensure the streets of Ryde provide the quality racing conditions required by the forthcoming Pearl Izumi Cycle Tour Series is to enter its final stage next week when Island Roads will undertake work in Cross Street around the clock, six days a week to ensure it is ready in time for the event.

Surfacing work has already been completed on Melville Street and is currently underway on the seafront (racetrack) side of the Esplanade, and Dover Street this week.  The most significant work will then take place in Cross Street next week – a section of road which requires major excavation and reconstruction as well as resurfacing.

As a result it is envisaged that the road will be closed to vehicles between Union Street and George Street from Monday April 20 to allow the improvement work to be undertaken and the road re-opened in time for the prestigious event. Pedestrian access will be maintained along Cross Street during the works. Diversions for vehicles will be Dover Street, Park Road, Star Street, High Street, Green Street, West Street and Lind Street.

Given the scale and location of the project, Island Roads, last week met members of Ryde Town Council, local Councillors and Ryde Business Association to discuss options for work and to agree a preferred way forward.

It was decided that undertaking the full reconstruction project – as opposed to a simple resurfacing that would be prone to rapid deterioration without the underlying problem being addressed – was the preferred solution as this would mean less disruption overall and provide a long-term solution to Cross Street’s historically poor surface quality.

“It was a very positive meeting and all parties recognised the event will bring a great many people and considerable media coverage to Ryde and to the Island,” said Keith Gourlay Island Roads construction manager.

“While clearly there will be some disruption while the work is done, it was felt that the Pearl Izumi was such an important event for Ryde and its economy that all the stops should be pulled out to accommodate it.

“Those attending the meeting felt the best way forward was to go ahead and do the full re-construction and resurfacing scheme in one go. Not only do we plan to complete this work ahead of the race, it will also leave residents with a greatly improved section of road for the rest of the summer season and many years after.”

Mr Gourlay said that not only was the scale of Cross Street work significant – excavations of a significant depth were required in places – there was also an abundance of utility services in the area, while sections of the road were also known to be built on blue slipper clay.

A contingency plan in which the worksite would be refilled and resurfaced, should the work schedule slip due to poor weather or should unexpected issues arise, had also been agreed. In such a case Island Roads would return to complete the works after the Pearl Izumi race event had taken place.

David Thornton, CEO, Visit Isle of Wight said: “We recognise that this major road upgrade scheme is going to be frustrating for local people, but it is the best time of the year for it to happen given that we want the town to look its best on TV.

“We hope that people will bear with us and that they will realise that this event is flying the flag for the whole Island”.