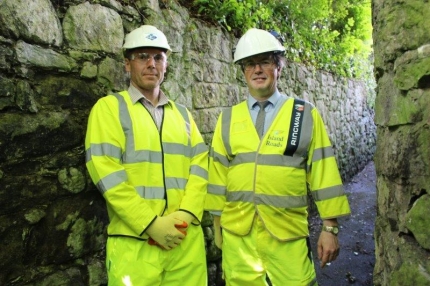 Ryde-based Stoneham Construction has been chosen to work on five sites as part of Island Roads’ current programme to repair and strengthen bridges and structures on the road network.

Stoneham has already begun work on the first of the sites in Bonchurch in a scheme to strengthen the retaining wall at Balaam’s Passage.

Paul Herbert, Island Roads service director said: “A major part of the Highways PFI is about supporting the local economy wherever possible. We have already spent around £35 million with around 150 Island-based supply chain partners and by the end of the contract we estimate £175 million will have been spent within the local economy.

“We have previously worked well with Stoneham on projects including the rebuilding of Wootton Bridge and we are delighted to be continuing this relationship with these other five projects in our structures programme.”

This year Island Roads is repairing, replacing or strengthening more than 60 structures across the Island. Already other local companies including Crown Park Estates has been engaged to work on some of these projects.

David Harris, from Stoneham Construction ltd, said: “Having constructed the new offices for Island Roads in 2013, we established a good working relationship with the Island Roads team and have been pleased to secure ongoing  further works, using our skilled team of local people, to assist in the delivery of their PFI  contract.”