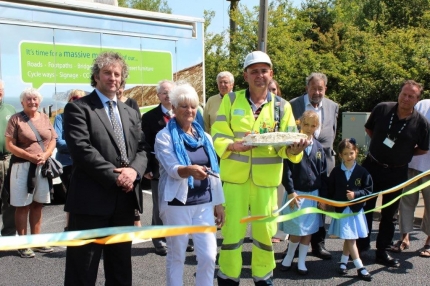 An Arreton pensioner who kept Island Roads crews refreshed during work to rebuild and resurface the main road through the village has officially declared the newly-completed stretch open.

Mrs Jackie Gorer, 72, was joined by IW Council leader Jonathan Bacon and Island Roads’ site agent Keith Sloane in cutting a ribbon to declare work on the two-kilometre section of Arreton Street complete a month ahead of schedule.

Arreton Main Road was the second major scheme to be completed this week with the finishing touches also being put to a three kilometre stretch of Whippingham Road between Crossways Road and The Racecourse.

Island Roads service director Paul Herbert said: “These two schemes have brought about a significant improvement to the Island’s strategic road network. Both schemes have also involved disruption to residents and we would like to, once again, thank them for their co-operation and understanding during the works.

“That co-operation has been highlighted by the actions of Mrs Gorer whose kindness and generosity has been really appreciated by all at Island Roads – particularly those working on the improvement scheme.”

Despite having to deal with her own health issues recently, Mrs Gorer has kept road workers in home-made cakes and drinks during the eight-week improvement project that involved rebuilding and resurfacing the highway between Arreton Cross and the Fighting Cocks Cross.

She said: “They have done such a fantastic job – they couldn’t have done any more to assist the local residents. I was very happy to supply them with cakes and very pleased to hear they enjoyed them so much.

“I was also delighted to be asked to open the road and thought that I would bake another cake to mark the occasion. It is a carrot cake with black icing to represent a new road and road-worker figures borrowed from my nine-year-old grandson Cameron Estridge. It is my way of saying a thank you to all the men who have worked so hard to improve the road and to make life as easy as possible for residents during the scheme.”

Cllr Bacon said: “I am pleased that Island Roads worked so hard to minimise disruption on what was clearly a major scheme affecting a busy road at an important time of the year for the local tourism economy. The completed scheme is both a vast improvement on the previous road surface and is a very visual reminder of the good work Island Roads is capable of doing.

“Island Roads have done an excellent job and are to be congratulated.”

Mr Mick Thirkettle, chairman of Arreton Parish Council, praised both the information given to residents throughout the scheme and also the attitude of Island Roads staff on site.

“They really could not have been more friendly or co-operative and they have done their utmost to minimise disruption,” he said.