Scores more structures to be upgraded in 2017 by Island Roads 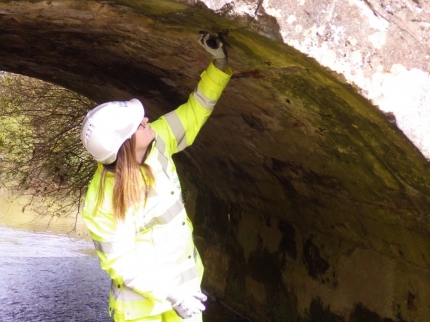 Work has begun on another busy programme of activity to improve and upgrade a number of bridges and retaining walls that support the Island‘s highway network.

Under this year’s programme by Island Roads, over 70 structures are due to be improved by December.  This follows an intensive period of activity last year when around 60 bridges and walls were improved across the Island.  This year’s work has begun recently with schemes to waterproof Fairlee Tunnel pedestrian subway at Newport, and to partially rebuild the retaining wall at Gate Lane, Freshwater.

At Fairlee Tunnel, a polyurethane resin has been injected through nearly 4,500 specially-drilled holes to waterproof the brick arch structure over a 55-metre length.  Not only will this protect and preserve the structure for years to come, it will also protect people using the underpass from dripping water.  As part of the initial phase of work, the structure has been pressure-washed to remove the build-up of dirt and grime, including the black soot that has coated the roof of the tunnel since it was travelled by steam trains.  In June, after the IW Festival weekend, Island Roads will return for the second phase, to repair or replace damaged brickwork and also to undertake re-pointing.

Ian Hodson, Island Roads Structures Manager, said throughout the year a number of different solutions would be applied to a variety of structures.  In the case of projects such as the deck replacement at Lower Calbourne Mill Bridge in July, the work will mean that the 33-Tonne weight restriction in place for some years can be removed.

Another scheme is to install new piles at the Horringford Boardwalk, which carries part of the Newport to Arreton cycle route over a flood plain.  Here, the current timber piles supporting the boardwalk, which are in poor condition, will be replaced by more durable ‘imitation wood’ piles made from recycled plastic.

At four locations, including Beaper Shute, Ryde and Scotchell’s Brook, near Shanklin, work will see these small bridges and culverts lined with a UV-cured resin.  This process strengthens and improves the condition of the structures with minimal disruption to traffic using the road above.  The process can also help to reduce the risk of flooding by improving water flow.

There will also be a scheme to strengthen Langbridge at Newchuch which will begin after the main tourism season and mean the temporary traffic lights at this location can be removed. Island Roads is also planning, subject to environmental consents, to repair the cycletrack at Yarmouth Mill erecting a temporary structure to ensure the route remains accessible during much of the work.

Once again, there will be schemes to repair retaining walls, including The Terraces off Esplanade Road, Ventnor and at St John’s Road and Whitepit Lane, Newport where the walls support raised footways.

Although the programme runs until December, some of the work will be concentrated during the summer months when there are more daylight hours and watercourses can be expected to be at their lowest levels.  The warmer conditions also assist the use of lime mortar, which is used to repair and repoint many older structures located in Conservation Areas.

“Once again Island Roads will be undertaking a varied and busy programme of work.” Ian said.  “Some of the structures we will be improving may not be well-known or even visible to road users, but they each play an important role in supporting the highway network.”