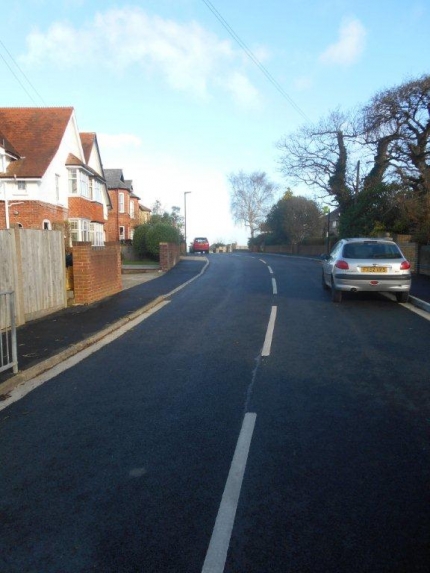 Island Roads has thanked Seaview residents after completing a major scheme to reconstruct and resurface one of the main roads serving the village.

The six week project to improve Old Seaview Lane between its junction with Steyne Road and Madeira Road is the largest project of its type so far undertaken in the district by Island Roads under the Highways PFI.

The 350-metre section had initially been assessed as requiring resurfacing but further Island Roads surveys revealed a more extensive scheme was required to address movement in the substructure. It meant the project that was initially earmarked for a few days became a six week project that involved digging out the largely clay foundations of the lane and rebuilding it with more solid material. In all, 1,400 tonnes – or 700 cubic metres – of material was removed during the scheme.

Prior to works commencing, Island Roads liaised with local Isle of Wight Council member Cllr Reg Barry and planned the works to be undertaken outside of the main summer months. It also visited the area in its mobile visitor centre to tell residents more about the work.

“There was no doubt that a large scheme of this nature – though absolutely necessary – would have a major impact on residents in this area,” said project manager Derek Benfield.

“We sought to keep residents informed before and throughout the work and took steps to reduce inconvenience during the project, but nevertheless we would like to thank residents and businesses for their understanding during the work.

“Such was the poor condition of the road and its foundations, a major scheme was absolutely necessary. I think residents realised that several weeks of work now will mean that this road will be in an acceptable condition for many years to come. In any case their patience and courtesy during the last few weeks has been much appreciated by Island Roads.”

A small amount of further work is required to adjust a BT box in one area of the road, adjustments that could not be completed during the main phase of the work.  It is hoped this will be completed in early January, once the necessary permissions have been given, and the road will remain open whilst this work is undertaken. Island Roads will continue to keep residents informed about the timing of these works.