Shanklin shelters spruced up for summer 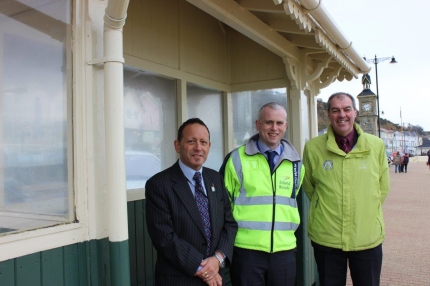 Nine beach shelters on Shanklin Esplanade have been given a substantial makeover to ensure they are in tip-top condition ahead of the summer season.

The work by Island Roads under the Highways PFI has greatly improved both the appearance and safety of the three Victorian shelters between the old pier and Ventnor and six newer ones between the Pier and Sandown.

As part of the improvement, rotten wood has been replaced and new screens installed. The structures have also been repointed where necessary and re-painted.

Given the historic nature of some of the shelters, Shanklin and District History Society has been consulted about the repair work. Local Isle of Wight Council members Jonathan Gilbey and Richard Priest and also volunteers from the Shanklin Green Town initiative have also been involved.

Cllr Priest said: “We are delighted that Island Roads has acted ahead of the tourism season to restore the shelters. The work has been very faithful to the original designs and is also very much in keeping with the appearance of Shanklin Esplanade which, of course, is a conservation area.

“It is more than a spruce up – they have undertaken some substantial work to ensure the shelters don’t just look very good but that they also meet health and safety requirements as well.”

Cllr Gilbey, who is also Shanklin Town mayor, added: “What particularly pleases me is not just that fact that the work is being done, it is the way it is being done, Island Roads, particularly the district steward Geoff Pidgeon, has really worked well with the community to ensure the work is of top quality and in keeping with Shankin’s heritage.”

Dave Wallis, Island Roads’ operations manager thanked the Shanklin community for their support and assistance during the restoration work.

“Now we have completed this work, Island Roads will, under the PFI contract, ensure they are maintained to this improved standard for many years to come.”