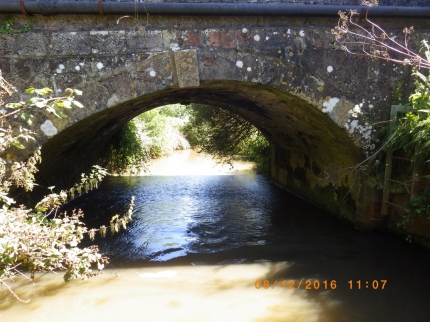 A three-tonne weight restriction has been put in place at Spicer’s Bridge at Langbridge, Newchurch.

The restriction has been imposed by Island Roads in conjunction with the Isle of Wight Council ahead of works to strengthen the listed structure, which are due to begin in September.

Spicer’s Bridge has been subject to traffic management measures for the last few months and enhanced inspections have been taking place for the past year. It was as a result of an inspection on Friday (July 7) that Island Roads engineers however determined a three-tonne limit was now required.

Key stakeholders in the village including businesses and elected representatives have been informed of the new weight limit. A diversion route which avoids the bridge is now in place for HGVs and a one-way system is also in operation for all vehicles on Mersley Lane, Newport Shute and Lime Kiln Shute.

Island Roads’ Structures Manager Ian Hodson said: “We appreciate that this is likely to cause inconvenience to local businesses and residents, but these measures are necessary to ensure the safety of the road network and to prevent any further damage to this Grade II listed structure”.

“The bridge strengthening scheme has been prepared and this is scheduled to be undertaken in September, outside of the peak tourism season, as it will mean the closure of Newchurch Shute to vehicles as a through road.

We had hoped to avoid the need for a weight restriction and have been undertaking regular, frequent inspections to monitor the condition of the bridge.  The inspection on Friday confirmed that damage to the bridge had reached a critical level which unfortunately left us with no option but to put in place this weight restriction.”