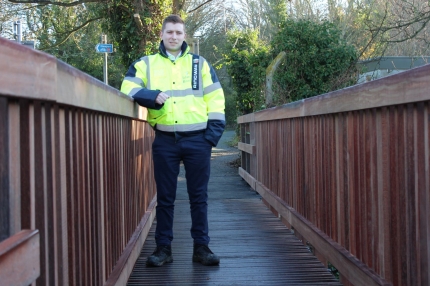 Three footbridges have been upgraded by Island Roads as part of ongoing work to improve the local rights of way network.

The B252 Shide Path footbridge and the B306 footbridge at Sandy Lane – both of which are part of the popular Newport to Sandown Cycletrack – along with the B313 footbridge over Morton Brook at Brading have all been replaced and upgraded in a three-week programme of works.

Besides being rebuilt and strengthened, parts of the footbridges such as the handrails that were previously soft wood, have been replaced with hard wood components to make the structures more durable requiring less maintenance.

Island Roads structures project manager Jason Boulter said: “We scheduled the work to avoid the busy summer months on this popular route. While this has reduced inconvenience, it has meant that we have had to contend with some pretty poor weather conditions.

“Nevertheless we have completed the work on schedule. We have already received some very positive feedback from the users of these busy structures which now look a lot better and will require less maintenance in future.

“It has obviously been necessary to close these footbridges while work has been underway so we’d like to thank the users for their co-operation during construction.”