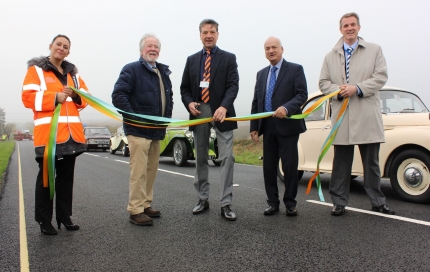 A parade of more than 70 vintage vehicles has officially declared the Military Road re-open following a major upgrade project by Island Roads.

A 7.5-mile section of the iconic Military Road has been upgraded in what is the largest carriageway improvement project delivered in a single scheme by Island Roads under the Highways Improvement Programme.

The whole section between Brook and Chale has been resurfaced and, where necessary, rebuilt in a scheme lasting just over four weeks.  The whole 12-miles of the Military Road has now been upgraded by Island Roads.

Island Roads scheduled the project for outside the main holiday season but before the onset of winter when severe conditions – and resulting delays – could be expected. Work was also undertaken around the clock to reduce disruption and continual liaison was undertaken with local business and residents to accommodate their access needs wherever possible.

Keith Gourlay, Island Roads construction manager, said: “We would really like to thank the local community for the support and co-operation they gave us during the work.

“We were pleased to be able to deliver this major improvement project with only a small number of lost shifts – through issues such as the weather and ground conditions – and we hope residents and tourists will now enjoy a smoother ride on this scenic and historic stretch of road.”

Ian Ward, IW Council cabinet member for infrastructure and transport said: “This project was a huge undertaking and I am delighted it has been delivered to schedule and with considerable effort given to working with the local community to minimise disruption.

“This follows on from the recent strengthening of the Brighstone Viaduct and is indicative of the massive investment the Island is able to make in its road network thanks to the huge Government grant unlocked by the Highways Improvement Project.”

The parade of vintage vehicles was intended to drive home the message that the Military Road – one of the UK’s most photographed highways – is a route to be enjoyed at a leisurely pace.

The ride-out featured vehicles from the Vectis Historic Vehicle Club, the Island MG Owners Club as well as several smaller groups and individuals. Southern Vectis also brought their 1939 Bristol K5G open top bus, affectionately known as Old Girl, to carry other dignitaries and guests along the ride-out route to the Wight Mouse in Chale.

David Batchelor, events coordinator for the Vectis Historic Vehicle Club, said: “It was an absolute pleasure to drive along the newly resurfaced road today and we were delighted to be invited to be part of the official opening. Island Roads has done a superb job and I am really pleased that so many vintage vehicle owners came out today to enjoy the smooth ride along this beautiful stretch of road.”

Lizzie Wade venue manager at IW Pearl said: “The Military Road certainly needed upgrading and is now looking fantastic. This is a very popular road used by locals and tourists and its vastly improved condition this will reflect well on the Island

Though the road is once again open as a through route, further work – such as verge re-instatement – will be undertaken in the coming days to complete the project. While this is on-going, it is possible traffic will be controlled by traffic lights and some locations.