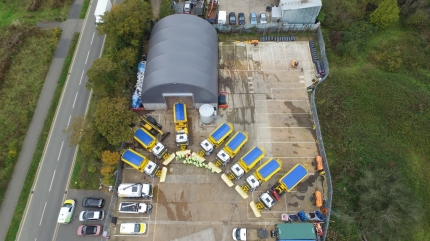 The latest technology will be used to help keep the Island’s treated routes free from ice when Island Roads embarks on its winter highways service this year.

The innovative technique used successfully elsewhere in the country applies the salt in a pre-wet format mixed with a brine solution, which helps the salt apply more quickly and accurately to the road ensuring it gets to work immediately and stops ice from forming.

The pre-wet mixture is created using a brine solution mixed at Island Roads’ purpose-built Stag Lane depot, using a special, recently installed machine called a saturator.  The salting vehicles then carry the product which combines with additional salt on the machines and is discharged as a mixed solution on their ‘gritting’ runs across the designated roads around the Island.

Dave Wallis, Operations Manager for Island Roads said: “We have invested in this latest machinery to try to ensure that we have the best products to tackle the Island’s roads in the winter and keep them safe for people driving out and about around the Island.  We have also increased our stocks of salt to 1600 tonnes – above the levels required –  and our drivers are undertaking trial runs again, as they do annually, around the Island to ensure we are fully prepared ahead of the winter period.”

Island Roads have six frontline salting vehicles (or gritters as they are often known) which were named by Island school children in their first year of operation; Frosty, Snowy, Brad Gritt, Goliath, George and Sally.  There are also five further large salting vehicles and three smaller vehicles with snowploughs, should conditions require their use. All vehicles are based at Stag Lane along with the company’s huge salt barn.

Decisions concerning when to despatch the salting lorries are informed by national and local data including daily Met Office reports providing information bespoke to the Island’s highways on a 24 hour basis. Two local weather stations – one at Duxmore on the Downs Road, providing readings at one of the highest points and one at Rowridge, Calbourne providing readings at one of the lowest points on the Island– also help inform a decision on whether to salt.  This information is supplemented by on the ground visual inspections from Island Roads staff.